While chatting with Professor Scanlon in Office Hours this afternoon we had an interesting discussion that I wanted to open up to the class.

It is evident that Dickinson was a fan of the Brownings (Robert and Elizabeth) and the individual works they put out from Britain. Professor Scanlon has even mentioned that Dickinson wrote a poem when Elizabeth Browning died and is known to have had pictures of her framed in her bedroom. Likewise, I noticed in  F360A- “The soul has bandaged moments” that she mentions Goblins. This immediately made me think of Christina Rossetti’s “Goblin Market” (which was published in the same year.) We have even seen her work compared to Keats because of its influence/similarities. A book called “Woman in White” by Wilkie Collins was also all the craze during Dickinson’s time in both Britain and America. All of the additional authors that I have mentioned are either British Romantic or British Victorian authors.

However, we don’t hear anything about Whitman’s interest or influence from British authors. Do you all think he read up on popular British authors? I was particularly interested if Whitman knew about Robert Browning, who was thought of as an outliner because of his experimental narrative form and lack of elegant poetic rhyming seen by other British poets like Tennyson. Does anyone know of any other British authors that might have influenced these two? Are there any authors from different time periods or other places that might have influenced Whitman? What authors do you think Whitman would have enjoyed?

Now that we are at the end of our course, I am curious, from the readings we have done, from all the poems that we have read, what is a lesson that either Whitman or Dickinson (or a lesson from each of them) taught you? While Dr. Scanlon was our professor for this course, I like to view both Whitman and Dickinson as our “Teacher Aides” or a “Co-Professor” in a way and I believe that their work does its own form of teaching. What did you learn from these poets? What is something you will take away from this course?

For me, I felt with Whitman and Dickinson this desire and urge to live unapologetically and I think that is what touched me the most. 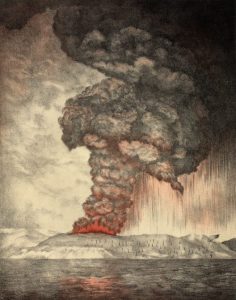 It was mentioned to me, after my conversation starter, that flowers weren’t the only metaphor used for sexual imagery.  Dickinson may have used volcanoes in a similar way. However, volcanoes can also be interpreted as imagination or emotion. So how did you read “Volcanoes be in Sicily”? Which words or phrases specifically gave you that interpretation? 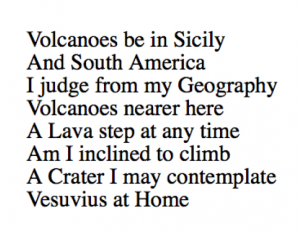 As shown in the image provided for us by Professor Scanlon, an iconic white dress is associated with Emily Dickinson. A dress, such as the one worn by the poet, is said to be considered an everyday garment to be worn around the home during her time period. According to the Emily Dickinson Museum’s Special Topics discussion of the white dress:  “The dress, made of a cotton fabric with mother-of-pearl buttons, is a style known as a wrapper or a house dress, worn by women as everyday clothing for doing chores and other activities inside the house. It was not a particularly unusual or expensive dress for its time.”

As I continued to read, it seemed like the article was saying that there wasn’t really any significant reference that makes the poet’s white dress specifically unique to her. The article states: “Despite popular conceptions of Dickinson clad in her white dress, the poet herself never mentions wearing white, nor does she wear white in the few existing images of herself. ” Nevertheless, a myth began to arise that Dickinson only wore white. This myth may have begun with Thomas Wentworth Higginson’s description of seeing Dickinson in white and then was promoted by the townspeople. Eventually, “Dickinson was buried in white and enclosed in a white casket.”

So, why do most Dickinson lovers associate the poet with the white dress? Is it because it shows how reclusive she was in (supposedly) always wearing a dress to be worn around the house? Is it because they just greatly appreciate seeing an actual item worn by Dickinson? Does the white symbolize anything? Why do you think they chose to bury her in all that white?

Side note: My mind keeps telling me that Dickinson’s love for gardening doesn’t go well with the myth that she always wore white. That being said, I also read that bleaching was the common way to wash their clothes. So, who knows, maybe her whites were able to stay relatively clean.

At the beginning of the week, I was reading “I Sing the Body Electric” while also listening to an audio of it so that I could get the flow of the poem. However, as I was listening there were a few words that were different from what I was reading in the Deathbed edition of the Walt Whitman Archive. I didn’t think much of it (especially since there are so many editions) until I came across some of the questions in the VoiceThread slides. The first question Professor Scanlon asks on slide three (referring to page 85, section 6) is “At the top of the page, how is WW expanding his discussion beyond gender to other forms of equality?” In the Deathbed edition (1891-1892) those lines read as:

In this 1871-72 edition, WW clearly spelled out his intent towards slavery, however, he makes the stanza more ambiguous in later editions by changing the wording. Why do you think that is? Was it for poetic purposes? Was it a political issue? Does it have anything to do with the Civil War? Is there really nothing behind this and I’m just looking too much into it? How does this change affect the way you read and understand what Walt Whitman’s intent was?

This small difference just had my mind asking a lot of questions and I want to hear what you guys think. This is the first time I compared the editions and it makes me wonder what other major (or minor, depending on your stance) changes can be found.