While typing up my Conversation Starter, I found this YouTube video, which asks, “How would Walt Whitman and Emily Dickinson have fared if they met in real life?” Based on what we’ve read over this last month, both in their poems, and the second opinions of countless others, do you think this video provides an accurate description of such a date? If not, please explain what would’ve been different if Whitman met Dickinson.

Over the course of the past month, I learned about how Walt Whitman and Emily Dickinson portrayed themselves, both in their poems, and in real life. Whereas Whitman sang the praises of the human body, and photography, only two photographs of Dickinson exist, on account of how shy she was first thought to be. It turns out that, for all the times people considered the two to be polar opposites, they both were dealing with similar issues when it came to romance. In fact, their lives, and poems, could be seen as metaphors for someone discovering their personal identity.

For starters, Whitman dabbled with the more human side of romance when he penned “Calamus” for Leaves of Grass in 1860. “Calamus” was a series of poems about the sensual side of same-sex relationships, back when it was not so much a taboo subject, as much as it was unheard of at the time. Its themes included how people “[move] from claims of full disclosure … toward [both] revealing and concealing a ‘secret’ at the center of [their] identity” (Killingsworth 123). In other words, Whitman’s “Calamus” poems marked the inclusion of confessions, or coming out of the closet, into the gay culture of today.

This is emphasized in the poem, “Trickle Drops,” which compares the revelation of the narrator’s latent homosexuality to blood from a flesh wound: “From my breast, from within where I was conceal’d, press forth red drops, confession drops, / Stain every page, stain every song I sing, every word I say, bloody drops” (Whitman 104). To the narrator, admitting that they were gay at all was as painful as cutting or puncturing their skin, yet the relief of being honest about it was worth the blood being spilled as a result.

Dickinson, on the other hand, lived a rather contradictory life to how history saw her decades after her death. According to the Emily Dickinson Museum, she had “several significant male [and female] friends” in her younger days. The Dickinson Electronic Archives implied that the only other photo of her was one she shared with one of those friends, Catherine Anthon. 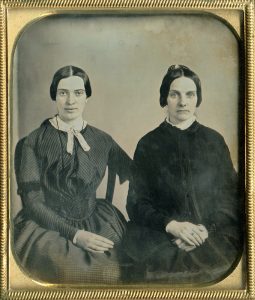 As for her poetic style, that can be summarized in this short poem, from R. W. Franklin’s The Poems of Emily Dickinson:

Were I with thee

Wild nights should be

Dickinson’s poetic style was short, direct, and to the point, providing big images with few words, compared to the bombastic, photographic imagery in Whitman’s portfolio. I read this example as Dickinson wanting to live her life to the fullest, regardless of what people say of her.

Overall, the lives and poems of both Whitman, and Dickinson, were metaphors for discovering one’s personal identity. What other poems, or places, interested you where the poets revealed their sexuality? What other forms of identity, besides sexuality, were the poets developing in their entries? Did it surprise you to see these poets, 150 years ago, expressing aspects of identity that society did not accept? How would the two react to the “identity politics” of today?