for some quick reminders about VoiceThread discussion grades, which will be completed sometime today. 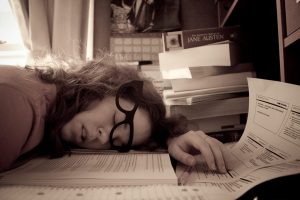 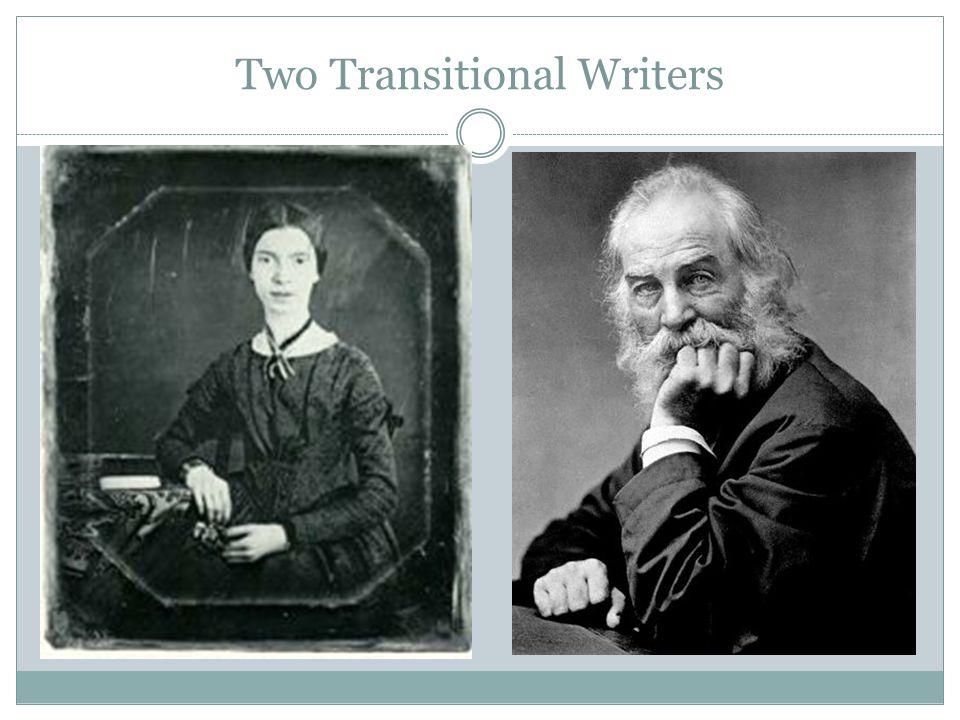 In the spirit of our class coming to it’s inevitable conclusion, I would like to bid you and our dear friends Walt Whitman and Emily Dickinson farewell! It has been really great getting to know these two inspirational authors in our our condensed 5- week semester and getting to know and collaborating with you guys in class discussions on our blog and in Voice Thread!

Dickinson and Walt Whitman had set the fundamentals and foundations for the future of American poetry and I am curious as to what you favorite facts and/or poetic styles of these two exceptionally avant-garde poets are?

As a final farewell bid to our poets; Whitman and Dickinson, please find attached this video in your honor and their’s, as we reach the end of the semester!

So long and farewell, to everyone! Enjoy the rest of your summer!

While chatting with Professor Scanlon in Office Hours this afternoon we had an interesting discussion that I wanted to open up to the class.

It is evident that Dickinson was a fan of the Brownings (Robert and Elizabeth) and the individual works they put out from Britain. Professor Scanlon has even mentioned that Dickinson wrote a poem when Elizabeth Browning died and is known to have had pictures of her framed in her bedroom. Likewise, I noticed in  F360A- “The soul has bandaged moments” that she mentions Goblins. This immediately made me think of Christina Rossetti’s “Goblin Market” (which was published in the same year.) We have even seen her work compared to Keats because of its influence/similarities. A book called “Woman in White” by Wilkie Collins was also all the craze during Dickinson’s time in both Britain and America. All of the additional authors that I have mentioned are either British Romantic or British Victorian authors.

However, we don’t hear anything about Whitman’s interest or influence from British authors. Do you all think he read up on popular British authors? I was particularly interested if Whitman knew about Robert Browning, who was thought of as an outliner because of his experimental narrative form and lack of elegant poetic rhyming seen by other British poets like Tennyson. Does anyone know of any other British authors that might have influenced these two? Are there any authors from different time periods or other places that might have influenced Whitman? What authors do you think Whitman would have enjoyed? 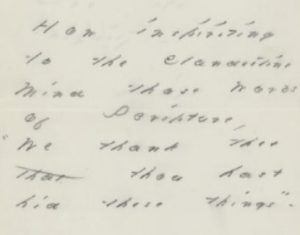 So was anyone ever able to figure out what this said and what it means? This is as far as I got (although I’m not sure I’m that close to being right…):

How inspiring to the clandestine mind those words of (I’m drawing a blank with this final one, guys)

“We thank thee that thou hast hid these things”

While typing up my Conversation Starter, I found this YouTube video, which asks, “How would Walt Whitman and Emily Dickinson have fared if they met in real life?” Based on what we’ve read over this last month, both in their poems, and the second opinions of countless others, do you think this video provides an accurate description of such a date? If not, please explain what would’ve been different if Whitman met Dickinson.

Now that we are at the end of our course, I am curious, from the readings we have done, from all the poems that we have read, what is a lesson that either Whitman or Dickinson (or a lesson from each of them) taught you? While Dr. Scanlon was our professor for this course, I like to view both Whitman and Dickinson as our “Teacher Aides” or a “Co-Professor” in a way and I believe that their work does its own form of teaching. What did you learn from these poets? What is something you will take away from this course?

For me, I felt with Whitman and Dickinson this desire and urge to live unapologetically and I think that is what touched me the most.

Dickinson is more known for writing about issues of mental health than Whitman is. To oversimplify, she is seen as the more emotional, dramatic, and distressed of the two, and Whitman as the more concrete, nature-focused, and positive of the two.

I began wondering how much truth there is to these impressions. (Do the genders of the poets contribute to the ways readers see them?) I know Whitman faced trauma in the war and loneliness and difficulty in his romantic life, so it seems likely that he too was quite familiar with mental health difficulties. Nonetheless, I do think it’s true that Whitman tends to have a more hopeful and awestruck tone in his poetry and places less of an explicit focus on the topic of mental illness than Dickinson. However, he does also offer advice to readers more explicitly as well. Here is a poem by Whitman that appears to be about depression, “O Me! O Life!”:

O me! O life! of the questions of these recurring,

Of the endless trains of the faithless, of cities fill’d with the foolish,

Of myself forever reproaching myself, (for who more foolish than I, and who more faithless?)

Of eyes that vainly crave the light, of the objects mean, of the struggle ever renew’d,

Of the poor results of all, of the plodding and sordid crowds I see around me,

Of the empty and useless years of the rest, with the rest me intertwined,

The question, O me! so sad, recurring—What good amid these, O me, O life?

That you are here—that life exists and identity,

That the powerful play goes on, and you may contribute a verse.

“O Me! O Life!”  reminded me of Dickinson’s “One need not be a chamber to be haunted”:

Far safer, of a midnight meeting
External Ghost
Than its interior confronting—
That Cooler Host—

Ourself behind ourself, concealed—
Should startle most—
Assassin hid in our Apartment
Be Horror’s least.

I find it interesting how both poems include the idea of multiple selves. In Dickinson: “Ourself behind ourself, concealed” (13). In Whitman: “Of myself forever reproaching myself” (3).How are the statements the poets make on this topic similar or different?

I also noticed that Dickinson presents the brain as antagonist to the individual, while Whitman sums up sadness and stress in terms of the outside world. Is it odd or surprising that Whitman does not mention the brain, given his emphasis on the body and its connection to the soul?

Whitman’s poem is also very different from Dickinson’s because it includes an “Answer” to the problem of depression, while Dickinson simply described problems without suggesting solutions. (Could this be because Dickinson wrote largely for herself, while Whitman wrote deliberately for a large audience?) I found a little slideshow of life advice quotes from Whitman here, which emphasizes his drive to positively influence his readers:

Do you think Whitman’s advice at the end of the poem was helpful to readers with depression? Could the “Answer” section possibly be read as belittling those who are suffering? Is it problematic to imply that depression has an answer that can be summed up in two lines?

I know we are only covering one of these four individuals in this class but I found this very interesting. For the second essay on Emily Dickinson I was looking into her poems and how her works included a lot of stress and depression (option D if anyone else did that one as well). But I just wanted to post this because it seemed pretty relevant to the whole idea of these writers either being completely mad or just genius.

Do any of you guys have tips or tricks to reading poetry? I know it’s a bit late to be asking, but I have been trying to understand it on my own and can’t seem to get the hang of it. I’ve never been able to see the point of the blue curtains in poetry (look up English teachers and blue curtains) and it really frustrates me. So, do any of you guys have any tips on how you read poetry and get the deeper meanings/what the author was trying to say?

Immortality: Where Do Whitman & Dickinson Stand?

I am perplexed. Throughout this very short period of time in which we have crammed Whitman and Dickinson into our minds and out our pores, I have concluded that they are very spiritual individuals. However, their spirituality is not of Dickinson’s Holyoke Seminary nor Wordsworth’s nature. As a novice reader of both artists, I have decided that both believe in the sanctity of humanity.

Whitman’s “Salut Au Monde” is a song about humanity to humanity. In this song he writes,

Each of us inevitable,

Each of us allow’d the eternal purports of the earth,

I believe Whitman is implying that mankind, in of itself, is god-like.  Additionally, it appears in this poem and many of the others that mankind is eternal, immortal, if you will. He alludes to a version of  immortality as he describes the graves in which our bodies return to grass.  He appears to be describing the cycle of life. What do you think? Do you believe that Whitman thinks because of our interconnectedness with one another that we are truly immortal? Do you think that Whitman believes mankind is divine or is he just trying to emphasize our equality? Does his immortality exist as a global consciousness? How is Whitman’s vision of immortality like Dickinson’s?

Dickinson seems to question her belief in immortality. Furthermore, her poems seem to contradict themselves.  On the surface, her poem “Going to Heaven,” reads as a contradiction of itself.

I don’t know when-

I’m glad I don’t believe it

Within this poem she seems to believe in immortality for others, but, perhaps, not for herself.  Does she believe this immortality does not exist for her because she was not able to make the confession of faith required by her religion? If she believes this,  does she in fact believe in Christianity? Another poem that seems to address Dickinson’s thoughts on immortality is “ Because I could not stop for death.” Personally,  I think this poem expresses a very dreary immortality. I don’t know about you, but the thought of being in a half-submerged tomb does not seem like an ideal eternity, even if millennia do seem like minutes.  Do you think Dickinson believes in immortality? How are Whitman and Dickinson’s opinions different on the matter?  Are there opinions of immortality directly related to their individual and varying beliefs in the  sanctity of mankind? Or,  does Dickinson believe immortality is not available for her because she does not believe in her sanctity due to an actual belief in the Christianity which she at times says to have denounced? My fellow muses, let us know your thoughts on the matter.